It's OKAY to want sex.

Crazy. I know. Revolutionary even. And here to explain why, is the blog that says it better than I could have...

This is your assigned reading for today. That's all. Have a nice day class!

*you should totally go check out www.doctornerdlove.com! Dr. NerdLove is "an internationally recognized blogger and dating coach who gives dating advice to geeks of all stripes. Making nerds sexier since 2011".
Posted by Raven Genevieve University at 6:40 AM No comments:

Learning from the animal kingdom

The human race has to be one of the only species on the planet where the female is snazzier than the male of the species. Numerous women primp and prepare themselves using products from a multi-billion dollar industry and spend insane amounts of money on clothes and accessories while the average guy buy one pair of shoes and a comb. (I'm acknowledging there are exceptions to this!) But seriously, why is this? How did we end up so 'opposite'?

I mean, Look at Birds the male is always more colorful and always prancing around, dancing and showing off for the female.

Meanwhile, the female sits back and waits to see which one is the most entertaining to her. (Refer back to lesson 101!!)

I realize there are some things that the animal kingdom does that probably won't work for humans. We're not going to get into issues with praying mantises or black widow spiders.  (But that DOES remind me of some good advice for a 400-level course on marriage. Hmmm.)

I'm also not going to bash makeup wearing women, because I ARE one. As much as I love having days where I don't feel the need to wear makeup, I admit that sometimes looking at your reflection in the mirror and and liking what you see makes a huge difference in how you feel. Sometimes a good hair day just affects how you act, how you walk, even how you talk. Ain't nothing wrong with being confident!

But why does our society only expect it from women and not men? I mean, I'm not saying that it's time to start wearing makeup, guys. I don't expect men to start curling your hair or wearing dresses with high heels... although you'd be surprised what a good eyeliner does for a man.

LESSON: Physical presentation 102
So here is the thing... a little basic hygiene can go a long way. Don't believe that crap that women love a sweaty stinky man... I mean, in fiction it seems great. But you're still gonna be asked to take a shower before any part of you tries to touch any part of us. A few simple maintenance details can go a long way. Trim your fingernails, wash your armpits, shave your beard into a nice, neat shape... even better would be to not wear clothes with oil stains on them. Try washing your hat every now and then. Maybe try to scrape under your fingernails on a regular basis.

Just a note: I'm not encouraging people to judge someone by their 'book cover' so to speak, but that's a double-edged sword because it's natural to evaluate things with our eyes (or fingers and smell, if you're sight-impaired). First impressions are HUGE...

Rather, consider it a sign of respect for your potential mate. Or consider it a way to honor the temple that God gave you. However you feel about it, it's simply a matter of showing pride in yourself. Take time to maintain that bod!

Lastly, no matter what, don't ever be afraid to express yourself and to be who you are. Just... maybe don't be the stinky kid in the class, ok?

HOMEWORK: Take a moment in the mirror today, and look at yourself, and tell yourself one physical trait that you like the most about yourself. Then take an extra second to give that trait a little extra attention today and strut your stuff like you own it!!! Show off those lovely genes you got!
Posted by Raven Genevieve University at 11:00 AM No comments:

No, that's NOT the perfect song...

So I was sitting around shooting the proverbial 'crap', and the topic of music comes up and I heard one guy tell another that if they wanted to get laid, they needed to play the right music. I started thinking, "hmmm. He's got a point...yassssssss"
Thank you Blake McGrath.

And then he played THIS song.

You have to realize, this advice was given to a SINGLE guy, who was not currently in a relationship, and I'm thinking "You're just gonna try to hit up a girl you just met and tell her you wanna get married already????"

I've said it before, and you're gonna hear me say it a million times in this blog, but it's all about COMMUNICATION. I know the song sounds sexy and it has a great beat and all, but DAMN. You're gonna propose to a woman with a song just to get laid... and then NOT expect her to go ape-shit when you decide you don't want to give her a ring the next day?

I don't care if you're a guy, a girl, or a fricking puppy-dog. When you hear THE WORDS, you're going to associate a meaning with them.

That includes ANY situation... do NOT make meaningless promises just to get a piece. It's false advertising, dishonest, and is just going to cause you drama in the long run. LOTS of drama. No one wants that kind of drama. (stop and let that sink in. SERIOUS drama.)

And if someone says 'let me play this song for you' or you hear 'this song makes me think of you', you're going to pay more attention to the words than you did the last time you heard it on the radio.

So do me a favor... think before you speak. And for heaven's sakes
THINK BEFORE YOU PLAY MUSIC!!!

HOMEWORK: Go fetch... a song that is a better 'get busy' song than "Let's get married".


Posted by Raven Genevieve University at 1:00 PM No comments:

Every now and then someone shares a meme or post that just can't be said any better than it already is. This is one of those times... I tried to find out where the original post was to give credit, but other than knowing that it came from "lazypacific" at possibly http://thecuriousbrain.com/?p=81836, I really couldn't find the original post. But here... I think all ladies should take a second to read this... 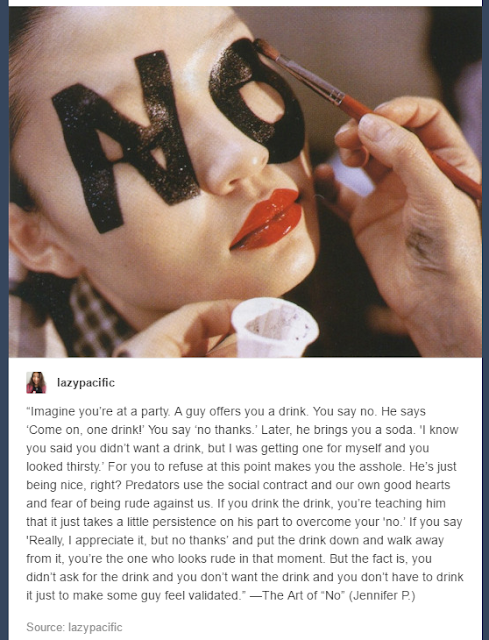 Guys: I understand that you've been taught persistence and hey, that's great.

The key here is to know when to stop asking the same damn question over and over again while expecting a different answer. You need to change the subject, ask a different question, or simply revert back to lesson 101. But more importantly, ACCEPT 'NO' AS AN APPROPRIATE ANSWER. Learn how to hear the word 'No' without having a tantrum. It's not attractive. It's really not.

Let's not forget that women all over have been warned about date rape drugs and most of us are scared to death of people who want to force us to drink more than we want to. Personally, I'd rather a guy offer me a basket of fries or a cheesecake. Not accepting the word "NO" when you offer to buy a drink just screams the word 'creep'.

HOMEWORK: Guys, try this next time. When a girl says "No"... tell her "Ok", and maybe add how lovely it was to meet her, and that you hope to see her again later. Then instead of being a persistent asshole... just... WALK AWAY. Walk away quick before she has a chance to talk with you and you end up sticking your foot in your mouth. Maybe add a cute little smile on your face before turning around. She'll watch you walk away thinking 'well that was nice', and after a while she'll realize she's still thinking of the nice guy who offered her a drink and got away. Let me know how that works out for ya.

Posted by Raven Genevieve University at 9:12 AM No comments: