...but he might not have if he had just opened his damn eyes.

I can't even count how many memes I've seen that joke around about what a woman is thinking because a guy won't look her in the face during sex. Do we even have to talk about this? Apparently we do. 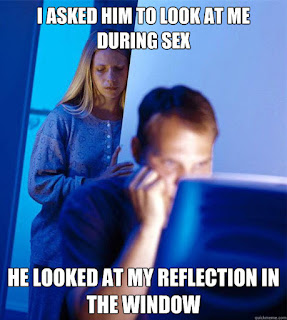 Ok, I get it. You have a favorite position, or body part, or maybe you're just one of those people that needs intense concentration, or gets distracted easily, and you have to have a focal point in order to maximize the experience.

That's totally fine. I get it. But for the sake of all low-self-esteem women/men everywhere, TELL US THAT!!!!

Now I admit that I don't stare down hubby in the eyes all the time when we are doing the pelvic tango...

But I try to make sure that I communicate the things that I love about him because I don't want my eyes rolling back into my head and him start to wonder 'who's face does she see in her head when her eyes are closed?'

YES. People wonder that. Not everyone. But some people. The question is... WHICH people? Do you worry about that? Does your partner? Today might be a good day to find out. Ask them if they get enough eye contact during whoopie time, and let them know that you are right there with them in that moment, even if it doesn't look like it. Reassurance can be an amazing thing, and you may not have known that they were so worried. Being able to get rid of that doubt can open up a whole new world for some people.

HOMEWORK: OPEN YOUR EYES. Just try it once. Try to get over that self-conscious feeling and really make eye contact. There is so much honesty in your eyes. And sometimes, it's way sexy. (Trust me on this.) And even if you can't pull it off, maybe you can both get a good laugh out of it later... 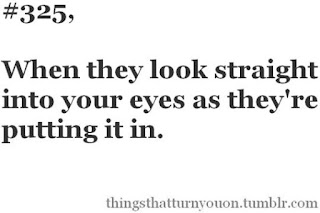 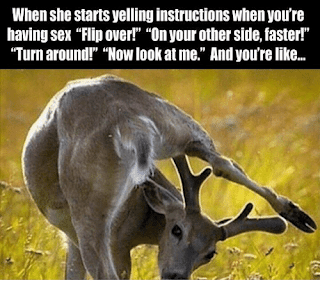 Posted by Raven Genevieve University at 2:39 PM No comments: